Hon. Bandula Gunawardana, Minister of Trade urged the whole stakeholders to actively engage in assisting all exporters of the country in every possible manner during this turbulent period enabling exporters to strengthen our economy.

After observing the export performance of the month of January, he further stated that it is encouraging to see important export sectors such as Tea, Spices & essential Oils, Coconut and Rubber-based products are doing well despite the global recession created by the pandemic.

As per the Customs statistics, earnings from merchandise exports recorded a negative growth of 9.64% in January 2021 with US$ 908.07 Mn compared to US$ 1,004.9 Mn recorded in January 2020. The exports which started to grow since last July continued the positive performance till September 2020 with minor contractions with reduced figures from October to December 2020. However, growth in exports in January 2021 is still modest compared to last five years. 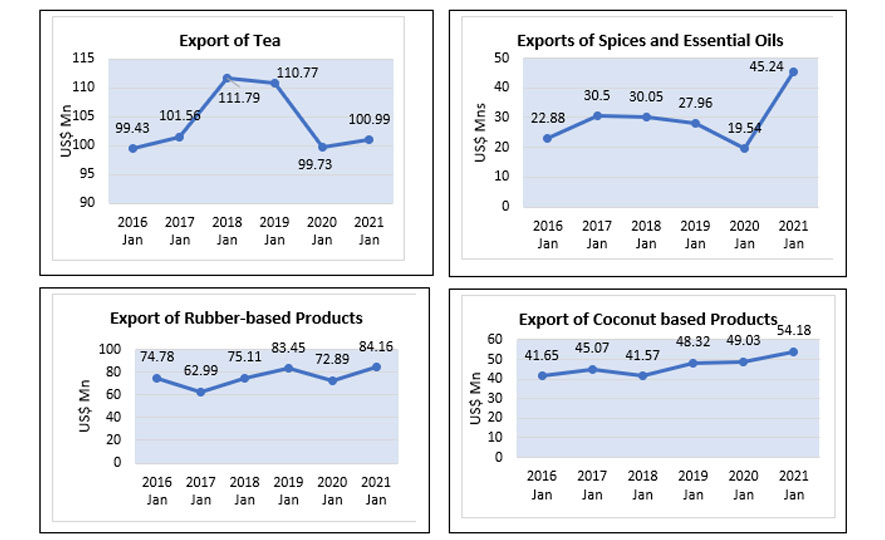 Being the largest single export destination, United States of America has absorbed US$ 233.53 Mn worth of exports in January 2021 recording a decline of 12.73 % in comparison to US$ 267.61 Mn absorbed in January 2020.
Exports to United Kingdom as the second largest trading partner recorded a decrease of 27.93% to US$ 61.49 Mn in January 2021 compared with January 2020. The United Kingdom left the European Union on 31st January 2020 and the transition period ended up on 31st December 2020. During this transition period, UK applied the same import tariffs it used to apply as a member of the EU. In the meantime, following BREXIT the UK introduced a new tariff regime, namely, UK Global Tariff (UKGT) with effect from 01st of January 2021.

Most of the drop in exports to UK was due to Brexit, but January 2021 also saw the re-imposition of lockdown in the UK, which undoubtedly had some impact.

The services exports estimated by EDB which includes ICT/BPM, Construction, Financial services and Transport & Logistics show exports of US $ 353.98 Mn for the month of January 2021 compared to US$ 331 Mn recorded in January 2020. Estimated service exports increased by 6.94 % in January 2021 in comparison January 2020.